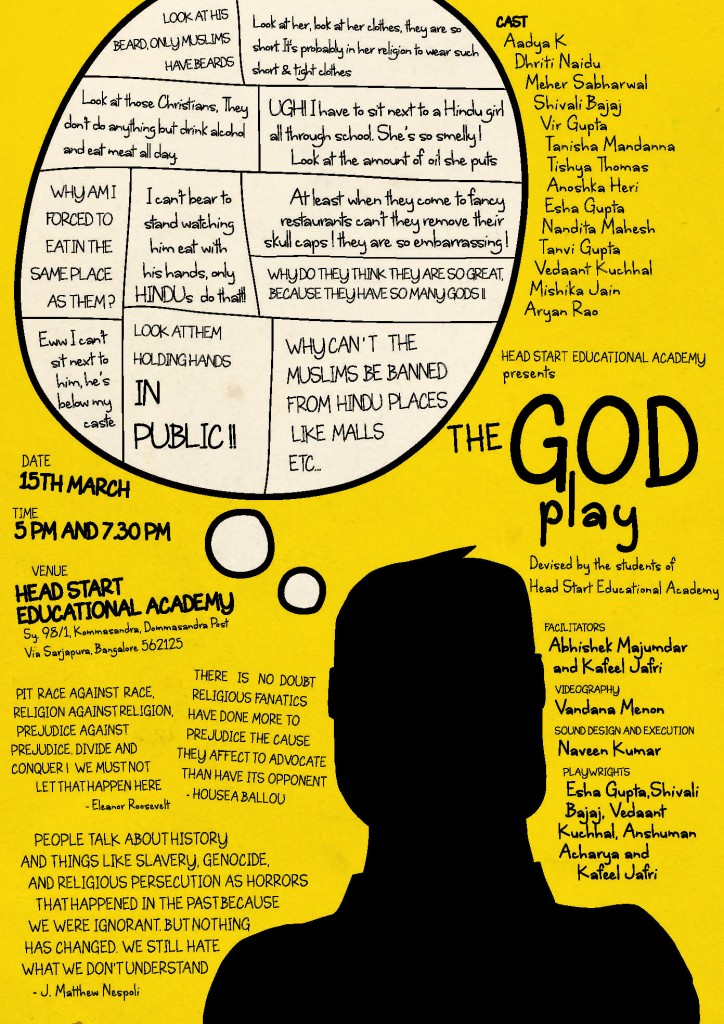 The God Play has been created after a year's devising and research process by the performers and facilitators of this play. It started with a series of questions around what the idea of 'God’ is; where this idea came from; what the need for it was and where it stands now.

The team then conducted interviews and visited places of worship of different religions. They interacted with preachers of each religion. In the midst of all this, what became clear is the difference in what a religion says about God and what kinds of prejudice people carry in their minds about people of other religions.

The God Play is the culmination of a year’s work and we hope the young performers can share this work in the future with both the young and the old.

"I think this is and was a great process. In my opinion it was fun and informative. I would like the audience to come and watch our play because it is funny and the topic (religious prejudice) is very interesting. Also, it talks about the state our country is in now."
- Meher

"The process was extremely enjoyable. There were times where we had to really focus and concentrate. It helped us think out of the box and to overcome our fears. I would invite the audience to come and watch our play because we worked hard and because it is about something pretty serious. Even though the seriousness wasn't really shown (food fight) the play should be watched and endless prejudice should be stopped. People should think about it."
- Anoshka

"Our play is about the very interesting conflict between religious people. Our play is a place to learn a bit about how fights arise in our country. It is also about how people have prejudices amongst each other. Without knowing a person people just discriminate and in the end it might turn out to be entirely different. The journey felt like a long and crazy one. We came up with many stories but in the end we made just one. I think people should watch it because they will realize the impact of things that happen and how stupid the reasons are."
- Vir

"I want people to watch our play because I don't want them to judge others on religion, caste and looks. They should also not think of us as people who are insulting other religions."
- Nandita M

"People should watch our play because it’s about society, prejudice and how they look at you based on your religion, caste, colour etc. Our play conveys the message that not everything is based on these factors."
- Shivali