Once upon a Head Start Mile
OCTOBER 2014
By Rahul Jain, a parent 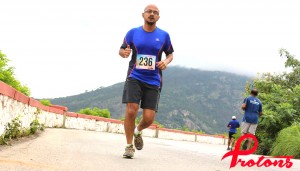 At a recent run up Nandi Hills

This happened about four years back on one of the Head Start Sports Day events at St John’s Hospital grounds. Sheetal and I were there cheering Tanvi as she participated in her events. It was a charged atmosphere with the rush of children from their respective team tents to field and excited announcements of events about to take place. All the children were putting in everything they had into the events. And the parents and teachers were continuously egging them on to try harder. There was a lot of laughter, some tears and a few scraped knees.

Out of the blue, there was an announcement for a “Head Start Mile” run for parents. Both Sheetal and I looked quizzically towards each other as we were not aware of such an event. Now there was a stronger excitement in the parent’s tent as to who will participate. I used to play badminton and visit the Gymnasium once in a while so I was confident that I would be able to complete the “Head Start Mile” so I registered for the run and so did about a dozen other parents.

After the children’s events ended, now it was our turn to line up at the start line to complete four rounds of the track in the ground and for our children to cheer. As soon as the race started, the ground was filled with the sound of each and every child cheering for either their own parent or the parent of their friend. Some of us parents ran fast in the first couple of rounds - ran out of steam somewhere in the middle and walked the remaining distance, where as some had decided to walk right from the word go. However there were some who paced themselves well and finished strong. I was one of the parents that somehow managed to finish the run. It was a great feeling to finish the Mile. I believe this feeling is what the runners call a “Runners High”. Soon after this the prize distribution ceremony was completed and the Sports Day was declared closed. The Sports Day had ended but the “Runners High” within me did not end.

Coming back home, I thought about the great experience that I had and how I would like to prepare and run better next year. As luck would have it I bumped into Riad, who had completed the “Head Start Mile” miles ahead of all the other parents at a restaurant the same evening and we discussed about how successful the Sports Day had been and how I would like to take on running more often so as to finish stronger next year. I decided that day that I would put together a plan and start running more regularly.

So began my journey. Initially I started with one minute walk one minute run and within a month or so I was running 2-3 kms without stopping. I soon found many running partners were on a similar journey to me. During one of the early Sunday morning runs, we discussed about TCS 10k one of the most prestigious 10km runs in the country which happens in Bangalore. I was unsure if I would be able to make it but I went ahead, registered and kept on scaling up my running.  A couple of weeks before the TCS 10k event the longest that I had ever run was 8km. On the day of the event with butterflies in my stomach I started and guess what I completed without stopping. I was ecstatic…I was on cloud 9, my first finisher’s medal and I was hooked!!!

Since that TCS 10k, I have participated in numerous 10km runs, about a dozen half marathons in and around Bangalore and also completed my first full marathon at Auroville, Pondicherry earlier this year. Running and general fitness (cross training/ weights and yoga) have now become an integral part of me, it does not matter if it is weekdays, weekends, on holiday – if I do not do some activity I feel like I have missed an important part of my daily life.

As I write this note, I am preparing for another half marathon at our own Bengaluru Marathon and I could not be happier. After such events when I meet other runners who are doing their first or nth long distance run, the usual topic is what got you started and my story always starts “Once upon a Head Start Mile…”

So thank you Head Start for introducing me to the Runners High.