Friday 6th November began at 8.45am. A rather late start, considering the previous five days began at 7am. First stop was Fatehpur Sikri.

The previous evening had been emotional for some children; they were probably missing home. Normally they don’t say too much when in this frame of mind and at times it is better to just let them be. Those who feel like talking do, and some prefer to be left alone. They have experienced new situations, seen their friends in a different light, felt differently about each other and moved around a lot.

It's been an enjoyable but tiring week and I would say that our children have handled themselves very well. Today’s children grow fast and tend to be more mature than the generations of the past. Some of their conversations have been interesting. A few of them were sitting at the Taj Mahal and talking about how long they have known each other and how they have grown together. One child said, “This is our first trip with our friends where we have been asked to carry a suitcase, take a flight, travel long distances by bus, check in and out of hotels and visit the Taj Mahal, all in one trip!”

Another child said, “This is the first time I have been to a city, a forest and to historical monuments on the ‎same excursion.” One interesting quote was, “I can now see so many good things in all of us!”

Teachers too, tend to tire and feel that they have not been in touch with their family’s ‎as much as they should have been, but then it’s what we are here to do. During my last school visit to Fatehpur Sikri I lost my Grandmother but could not go back to Bangalore because I was required to stay with the group. 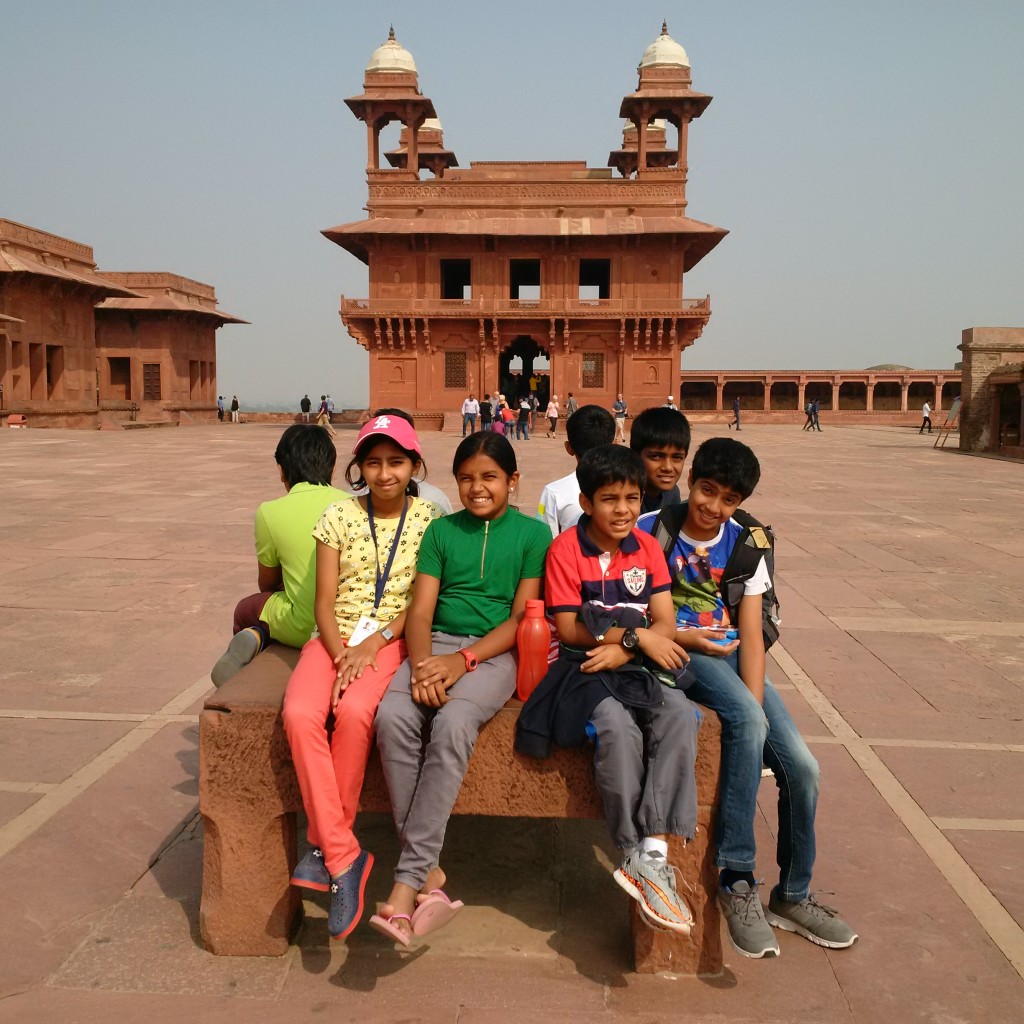 The city of Fatehpur Sikri was founded by Akbar the Mughal Emperor and it served as the capital of the Empire before he abandoned it due to paucity of water, and moved to Lahore from where he moved to Agra Fort. It is one of the best preserved sites from the Mughal Empire and its architecture is uniquely influenced by Hindu and Jain architecture, blended with Islamic styles. This Imperial Palace is constructed out of locally quarried red sandstone and has a very pleasing earthy look to it. It is soft in appearance and has so many open spaces. In pleasant weather it makes a wonderful play space for children. During hot weather you can sit on the steps of any of the structures and soak in the interesting architecture. 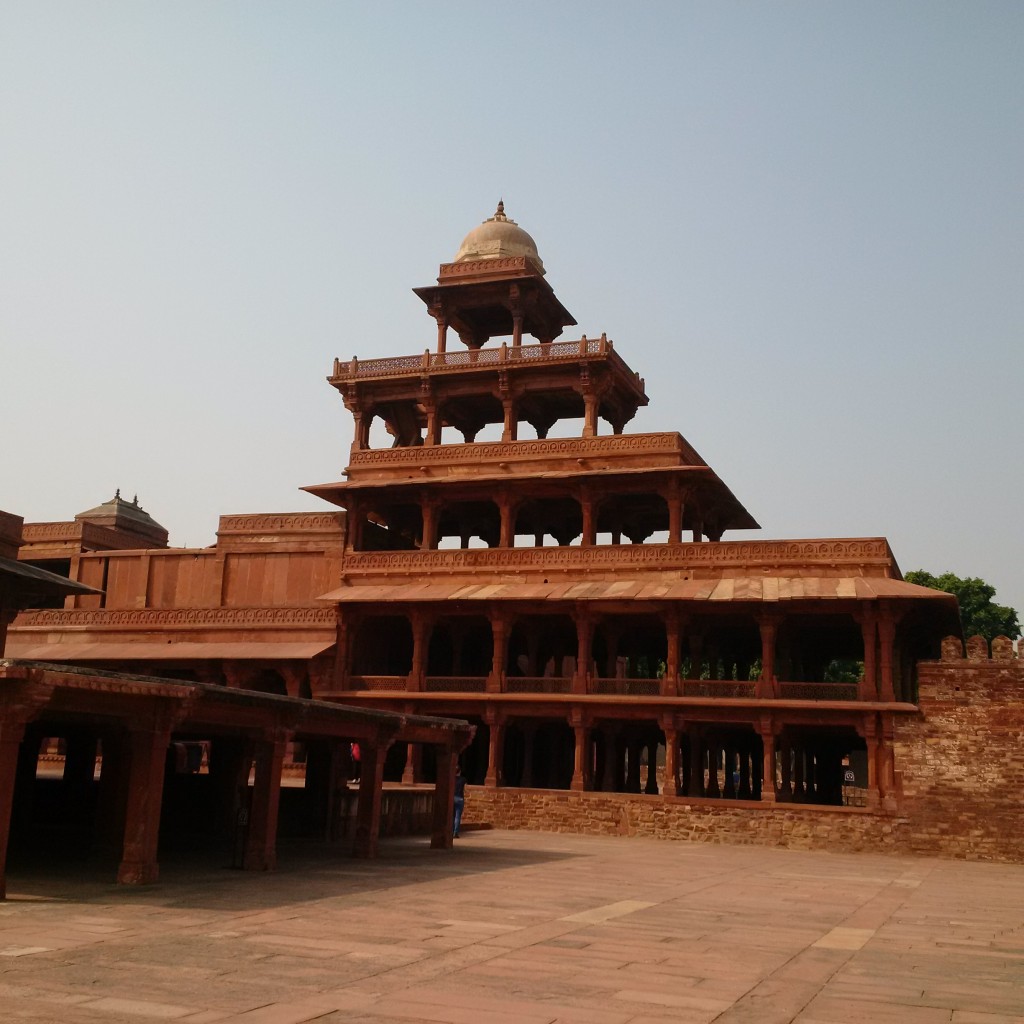 If you sit in the open courtyard between the structures or Pavilions and reflect on what could have been, it kind of speaks to you. The guides give you their versions of the past but it makes sense to do some worthwhile reading on the Mughal Empire. ‎In the midst of the red structures is the presence of green. The gardens are manicured and the green trees add to the canvas. But the walks through the structures are the best part of the viewing. The cool feeling as you step into the buildings brings on a sigh of relief and calm. 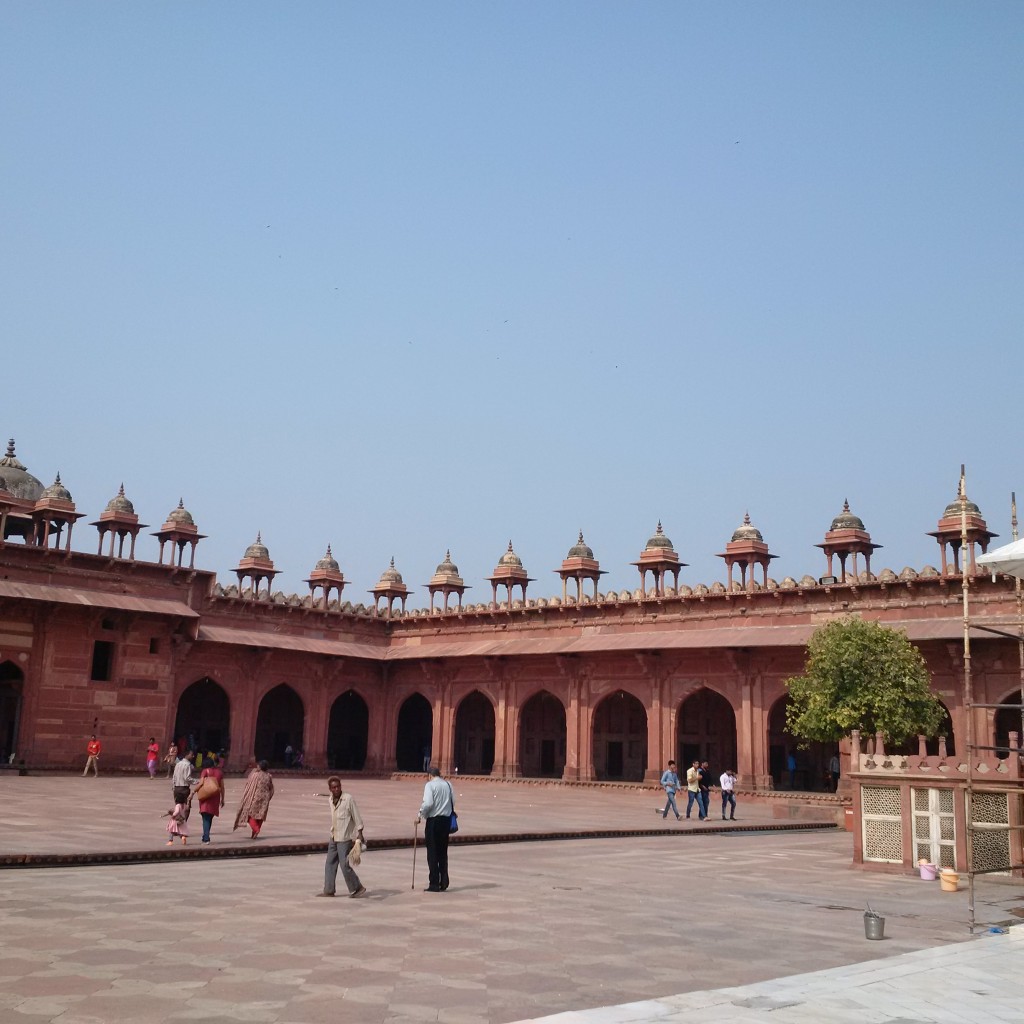 The architects Tuhir Das and Dhruv Chawla have provided for lots of ventilation and wind channels that keep the place cool all through the year. This belt is hot at most times. 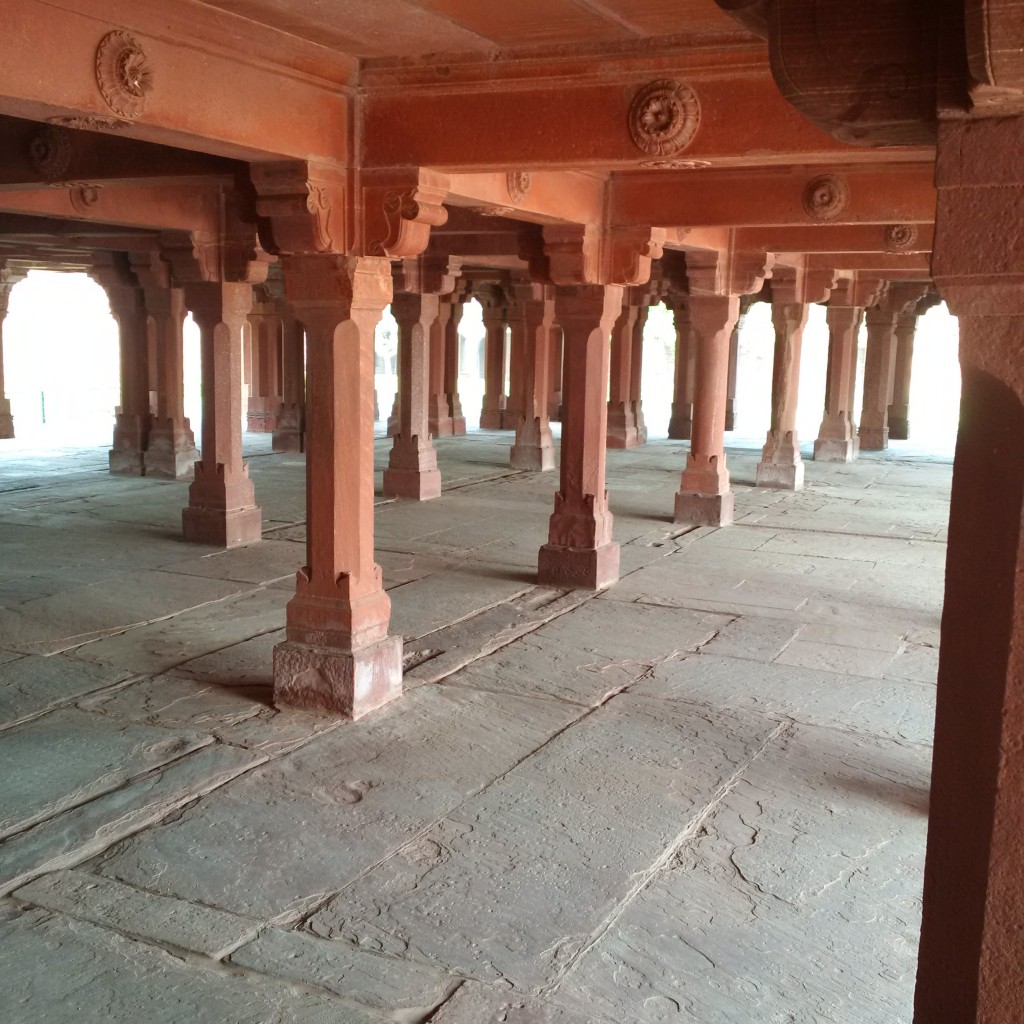 ‎Fatehpur is still holy to many people wanting to offer prayers, especially Friday prayers. It houses the dargah of Salim Chisti. It is majestic in appearance and its architecture is stunning, more intricate than Sikri. Here you see the Buland Darwaza too which of course, is everything you read about. 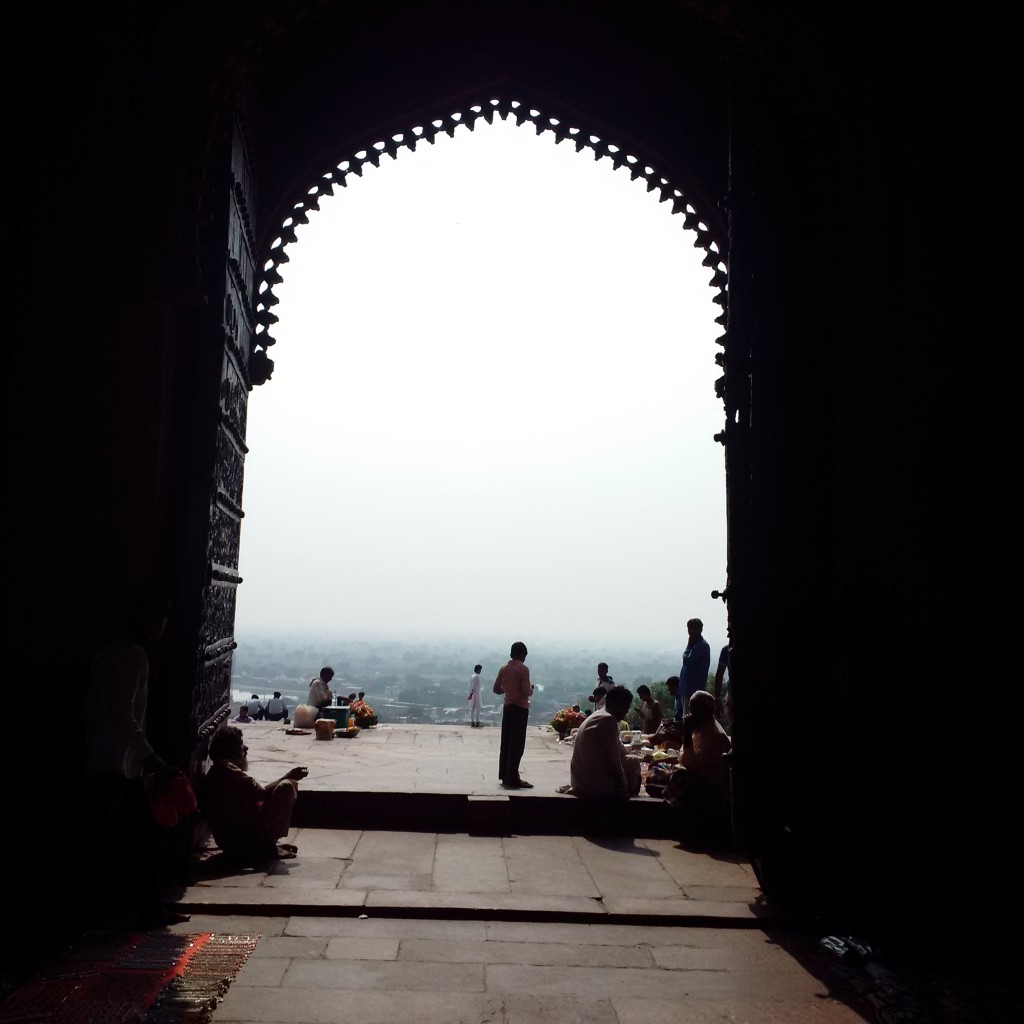 View of the Buland Darwaza

The guides keep referring to the ‘wish making’ at the marble dargah and many tourists are seen making wishes. The children listened ‎with interest and may be made a wish or two of their own. All this provokes you to think about the Dargah and its relevance to Islam.
The best part of this visit was that the children were fresh and absorbed a lot. They were fascinated by the tunnel or escape steps that lead to Agra, which is forty KMs long and ends up at Agra Fort which the guide says goes to Delhi Red Fort.

From Fatehpur Sikri we went back to the hotel for lunch and a short break after which we visited the Agra Fort and watched the Sound and Lights show. 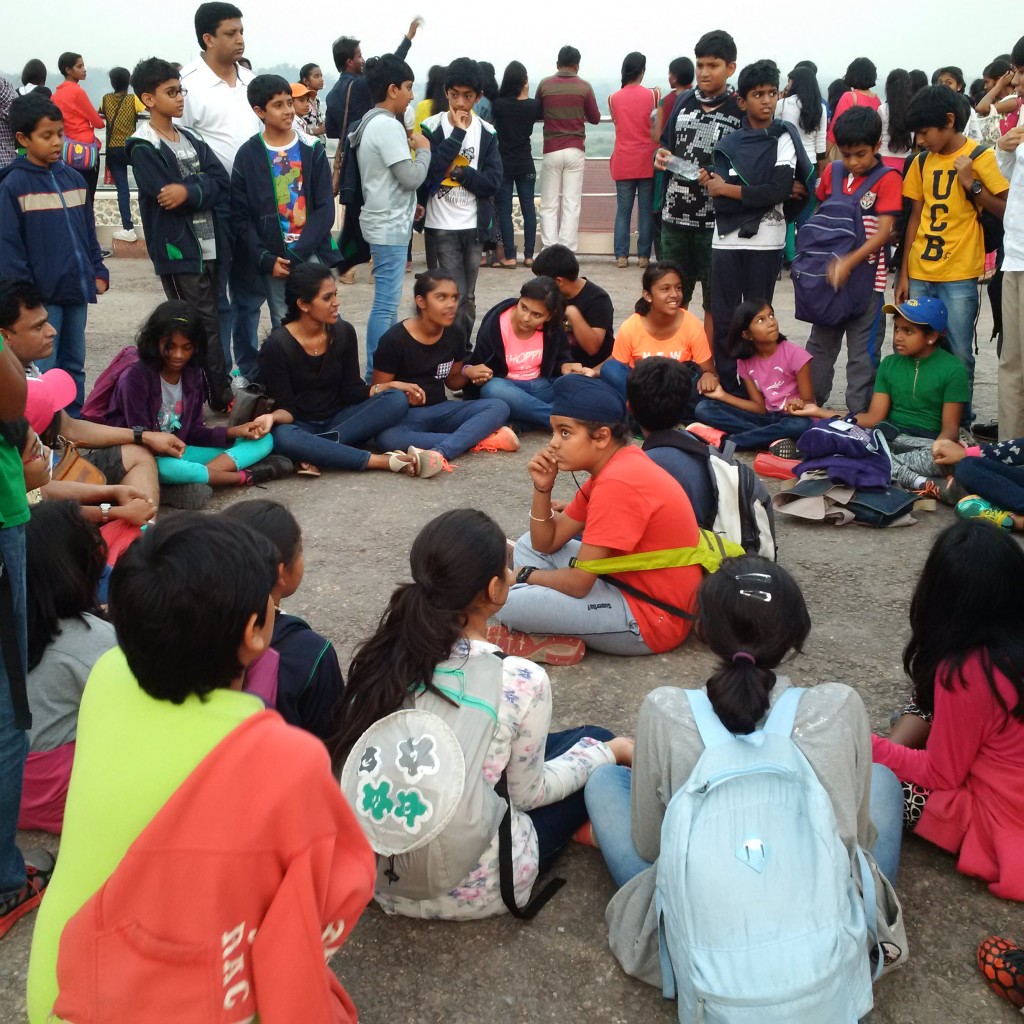 The Agra Petha is, I would say, an acquired taste. It can be a tad bit too sweet for some. Most of our children were able to enjoy one helping while very few opted for a second. The drive to Fatehpur Sikri is pleasant and takes about an hour. I’m sure visiting in summer would take a lot of tolerance as it is warm even in November.

Our evening was spent at the Agra Fort. ‎The Fort houses the Akbar Mahal, a grand structure, also a nursery for imperial children. Only women occupied this abode. The Jahangiri Mahal was actually built by Akbar. It has an impressive entrance and is constructed with red sand stone slabs. 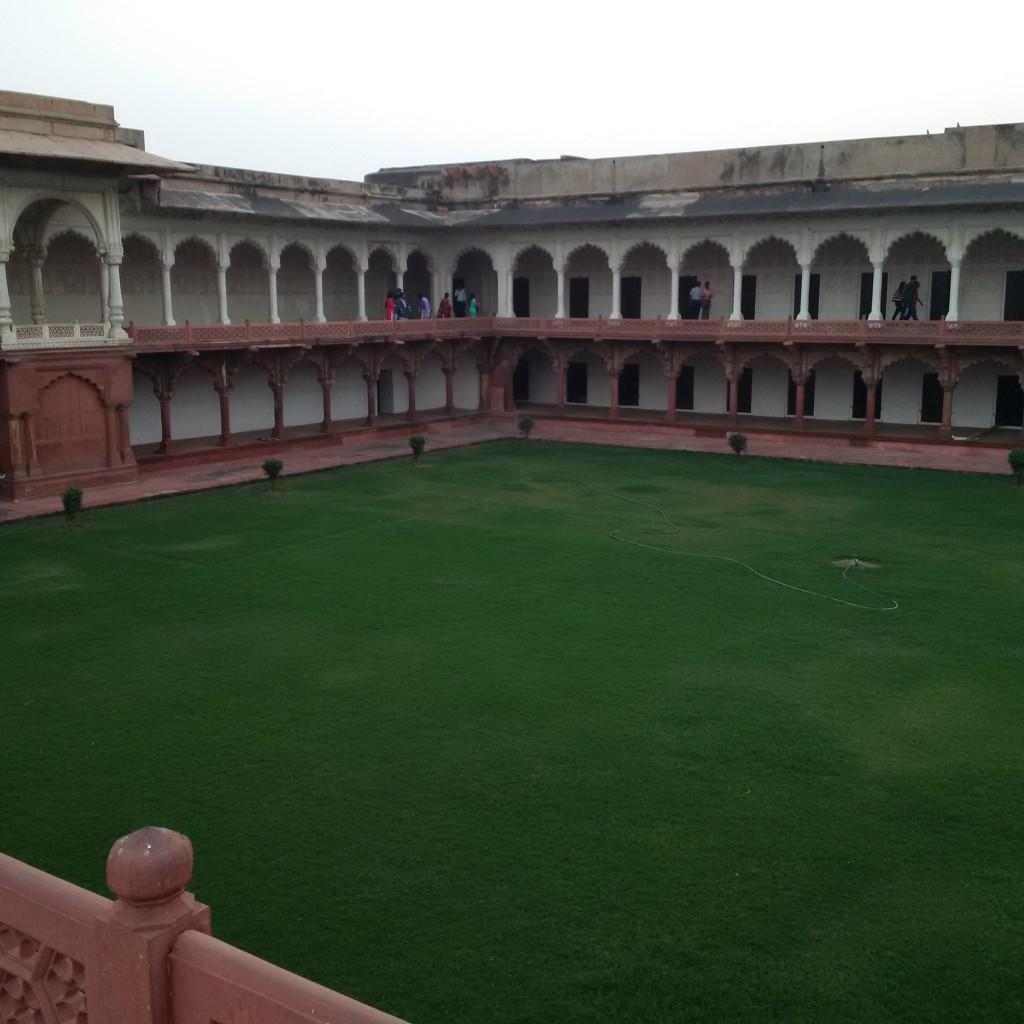 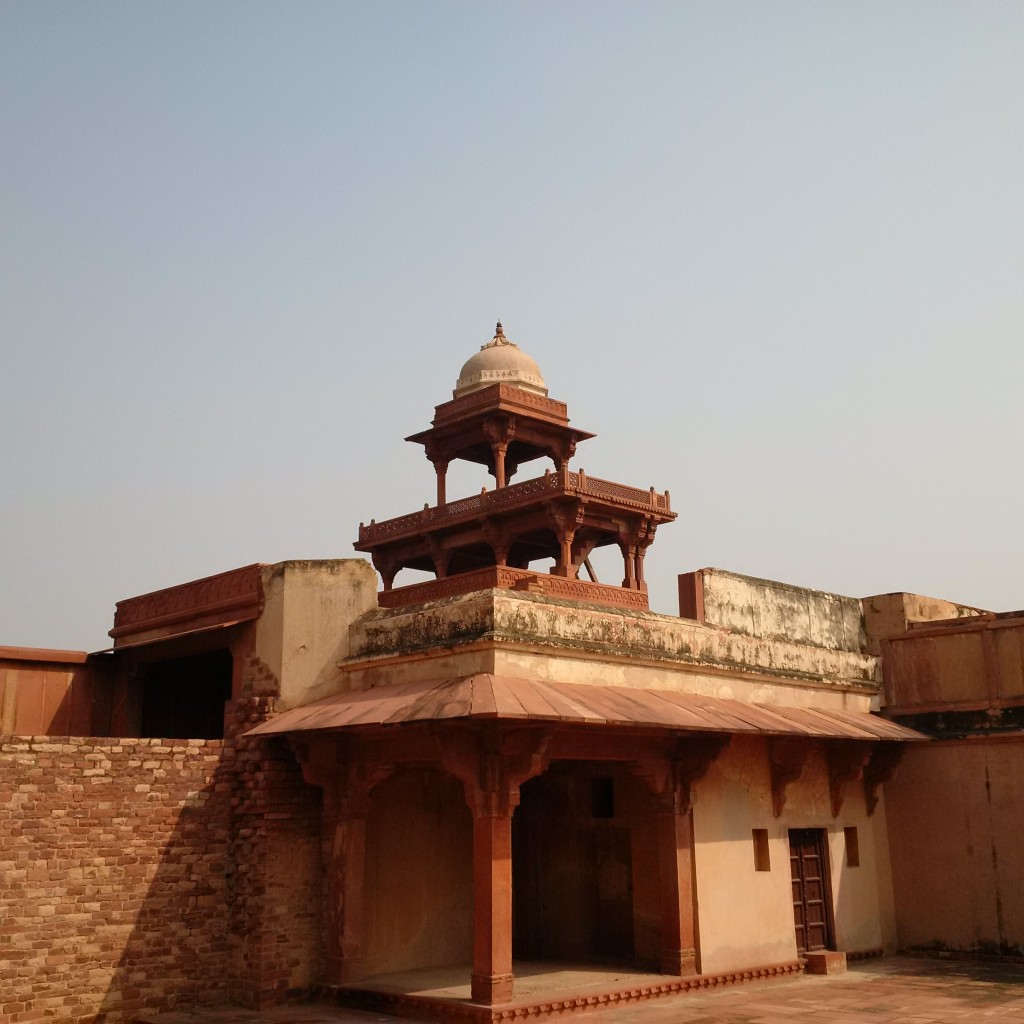 There is a courtyard where the opulence looks a bit jaded. The walls have carved niches and there are rooms that housed the servants. Shah Jahan decided not to renovate these buildings as they were for lesser mortals. There are Rajasthani and Persian influences to the design. From one of the rooms you get a fantastic view of the Yamuna River. This fort is a synergy of architectural influences from Rajasthan, Gujarat and Akbar’s own desire to build unique structures, forts that are progressive to the times and represent his creative thinking. For example there is a water cistern that sprayed perfumed water for the emperor to relax. Geometrical designs are consistent. From the Diwan i khas you can see the Yamuna river and the Taj Mahal. This is the best place to take pictures or even relax. 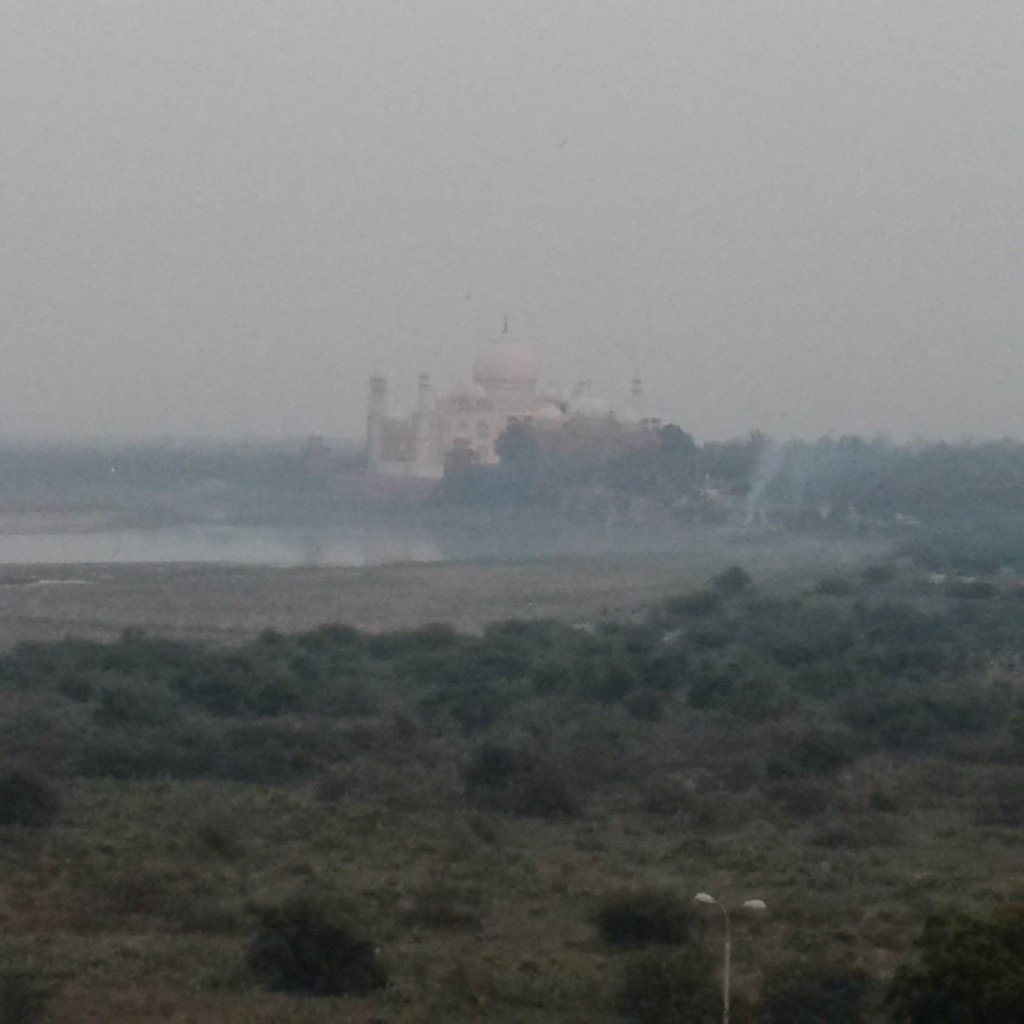 Taj Mahal from the Agra fort

The Fort represents the Moghul’s grandeur and zest for life. There is a lot to talk about and lots to absorb, however I have tried to capture some of the essence of what we looked through. 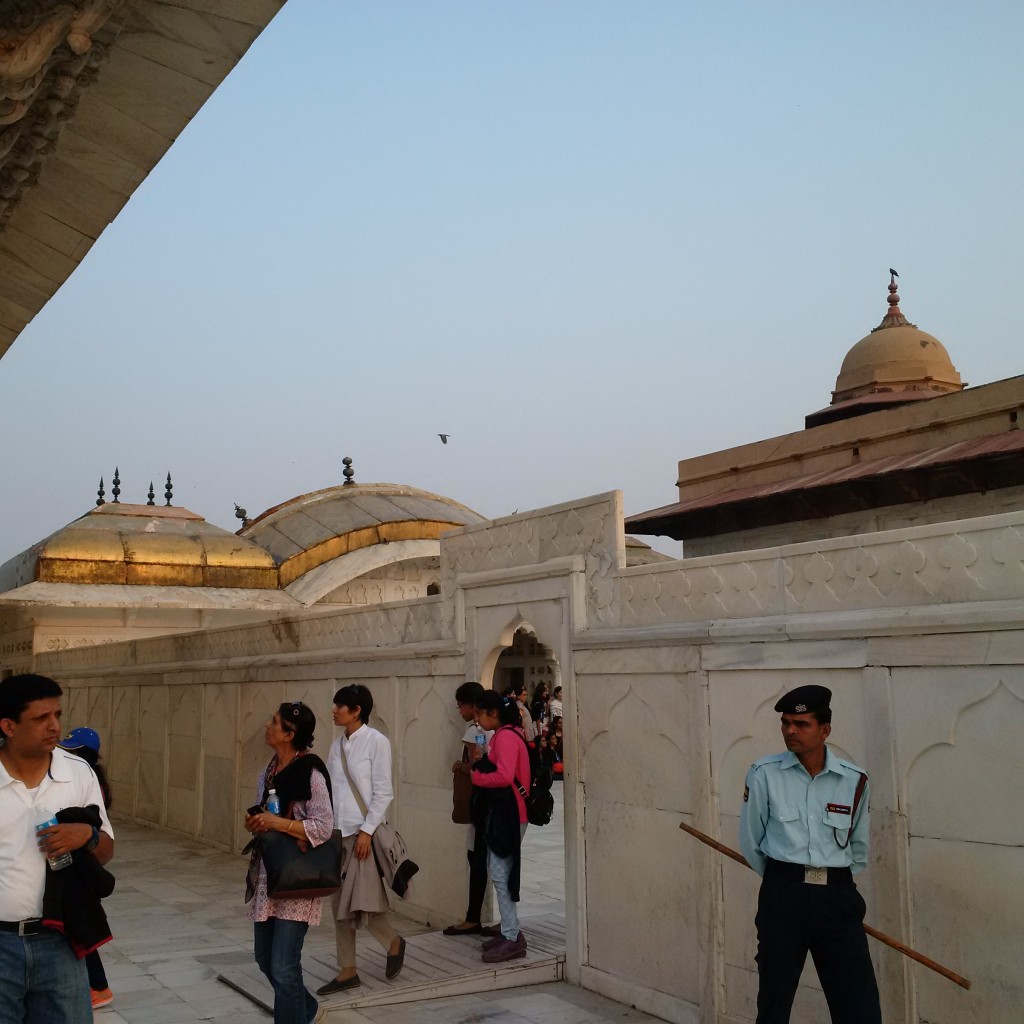 The group played games at the Fort and enjoyed its beauty. Imagine, what the Moghuls built, we enjoy! Such is life. As they say, all great things outlive the people who built them. Today the world enjoys these monuments and the wonder of it all. ‎We took more pictures at the Diwan i Aam which as the name suggests, is "the place for all”, the House of Commons. A lot can be imagined if you sit and think about how the people loved to see their emperors and come here and voice their problems.

The Diwan i khas is also where the Sound and Light show is hosted. It is a very pleasant place to sit and enjoy the presentation.

Looks like the Moghuls gave Agra a lot to celebrate for years and years to come. So many hawkers make a living outside the Taj Mahal and the Fort. The visitors keep their small businesses going. If not, I wonder what the city would be world famous for. Perhaps it would have found other activities to thrive on. There are parts of the city that have industrial and other options that are invisible to the tourists. But mostly it is tourism that keeps the local population going.

The children were patient while waiting for the evening show and we could manage a few meaningful conversations with some. Conversations provide children with information, and knowledge leads to discernment. Exposure too brings about and initiates sensitivity and consciousness. Being aware of what different cultures are, and the way people live, helps in understanding diversity and may bring about an acceptance of the facts of life.

The day wound down with an interesting breathing and meditation activity conducted by Monica and some singing and music that seems synonymous ‎with every Head Start excursion to this part of the country. Somehow we find time to get in touch with our musical instincts when we travel.

On Saturday morning we left for Delhi and went straight to the airport to catch our flight to Bengaluru. The bus ride back was full of banter and excitement. We are all tired but satisfied with what we have accomplished over the last week. It has been exciting and tiring and our team of teachers too have learnt a lot from the experience. For some it was a first time and for some the third or fourth.

I have thoroughly enjoyed writing about our experiences ‎and spending time with the children. I am sure they will remember this journey for a while and will be ready to travel again in the future.